This week’s “Meet the Director Monday” is Rusty Crotty. Rusty is an optometrist at Lifetime Vision Center here in Auburn and has served on the board for three years.

Rusty was born and raised right here in Auburn, NE. He left to go to college, eventually going onto optometry school. After school, Rusty then came to Auburn to work with his father. He met his lovely wife Bobbie, and together they have two precious daughters. Ari is three and Cora is one, and Rusty loves spending his free time with them. When he is not working or spending time with family, Rusty enjoys playing softball and in the summer, sand volleyball. Rusty is an avid sports fan and when asked the question “Husker Football or Husker Volleyball?” Husker Football wins with little contest.

Rusty became active with the Auburn Development Council because he was looking for opportunities to help out the community after he moved back. Rusty joined the council mainly because he was looking for a way to make the biggest impact he could on Auburn’s future. To Rusty being a member of the Auburn Development Council means that he cares about the future of the community. “Too many people complain about things and don’t take action, so this is me taking action,” he said. Rusty loved growing up in Auburn and he wants to continue to make Auburn an awesome community for his own kids to grow up in.

While Rusty enjoys everything being a board member of ADC has to offer, his favorite part about this role is: “Being in the know and being involved with all the things going on in our community.” When asked the question, “Who is someone you look up to on the ADC Board?” Rusty said Auburn Development Council President, Leslie Clark. “She has no fear and is jumping in and making things happen.” Rusty admires Leslie’s can-do attitude and positive spirit. Looking at the future of the Auburn Development Council Rusty claims; “We’ve got a good buzz going with our team right now. The Auburn Development Council plays an important part in the quality of life in Auburn, both now and in the years ahead.” 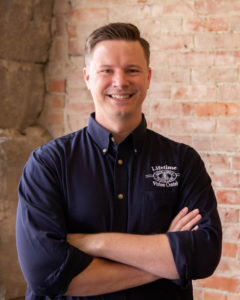